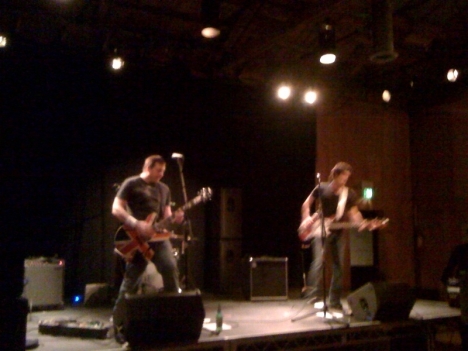 Past Saturday, Nov 14thThe Swagger Sticks played a show at the infamous Bootleg Theater in Silverlake. I was there, and I’ve got to tell you: I am happy I did not miss this.

Seeing this band truly is an experience. The front man, Aron Gibson, is a charismatic entertainer whose hilariously funny demeanor on stage makes his shows THE MUST see in town.

I had a talk with the band’s bassist after the show, who told me he is a stand up comedian. No kidding!! I think EVERYONE in the band is. Aron had the audience in stitches when he, with a serious look on his face, accepted the Heineken someone handed him on stage and declared: ” I just finished my bottle of Jack Daniels back stage but THIS (pointing at his Heineken) is just for show”.

The crowd totally went berserk when minutes later he announced with a sad look on his face right before starting their first song: “Sorry we forgot to bring our extended light show and the hologram projections”.

Besides being very entertaining and funny, The Sticks (as their fans endearingly call the band) were really tight, energetic, powerful and punchy in their performance of the songs. They played the whole album, and concluded with a smoking version of the Kiss classic “Detroit Rock City”.

The Swagger Sticks seem to be building a strong following in LA really fast, cause they had an amazing turnout on this show. After all: this was really only their 3rd or 4th performance since they released their debut album.

Stick it!, the debut from The Swagger Sticks, was released in August 2009 and draws on class of ’77 punk and a wide range of power pop and indie rock influences from bands like T he White Stripes, Foo Fighters, Killers, Green Day and Material Issu

The lead track, “Worldwide Pop Star” features Stick It! producer Jeff Lewis on trumpet and trombone. Jeff was the lead trumpet player for the Jackson 5 during their ’76-’77 tour. He plays trumpet with Tierra, an LA-based Latin R&B outfit, and has also played with Lenny Williams, Johnny “Guitar” Watson and members of The Doobie Brothers.

I was glad to see Jeff join The Sticks on trumpet to perform “Worldwide Pop Star” with the band on this show. It was one of the many highlights of the show.

You HAVE to check this band out, and you won’t have to wait too long to do so cause I’ve got FAN-TASSS-TIC news for you:

The Sticks are playing a show Saturday the 28th Nov in The TRip in Santa Monica AND… I will be taking over bass duties with The Swagger Sticks for THAT show ONLY. (The Sticks bassist will be performing stand up comedy shows in Vegas that weekend)

YES… you read that correctly:

Icky’s Ego bassist performing LIVE with the Sticks. BE THERE OR BE SQUARE.

This is going to be an amazingly fun show.

Come join me, Aron and The Sticks for what is going to be a great musical experience by a solid band that knows how to have fun and rock your socks off.